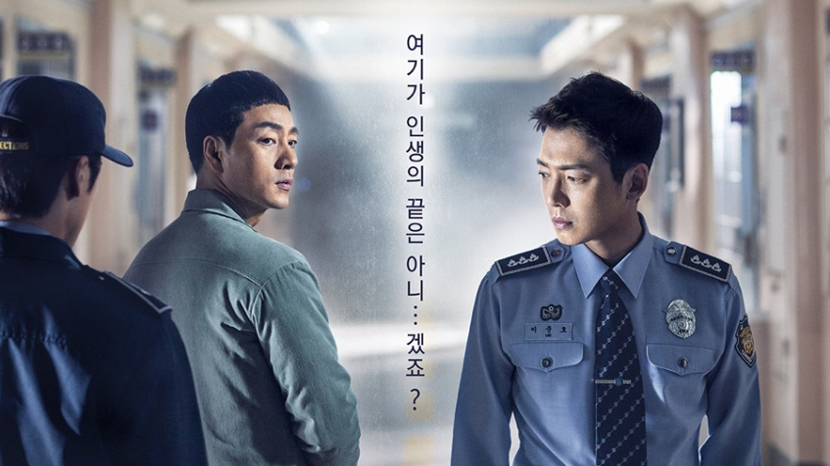 From baseball star to jailbird in Smart Prison Living

Smart Prison Living is approaching its premiere date, and promotions have begun with the first few posters being released. The show stars Park Hae-soo (Legend of the Blue Sea) as a prisoner and Jung Kyung-ho (Missing 9) as a prison guard; the black dramedy kicks off when Park, a superstar baseball player, somehow becomes a convicted criminal overnight. In prison, he becomes immersed into another world as he gets to know his inmates and how they ended up in jail. In the poster above, Park Hae-soo wears a prisoner’s uniform and asks, “This probably isn’t the end of my life…right?” as he passes by Jung Kyung-ho. The same copy is shown in the next poster, featuring Park Hae-soo solo, while the last poster shows him during his superstar pitcher days, where there are two backgrounds juxtaposed of a crowded baseball stadium and a stark prison. With Answer Me’s PD Shin Won-ho directing, it’s almost guaranteed that Smart Prison Living will be heartwarming. Kyaaah—excited already! Other cast members include Krystal (Bride of the Water God 2017), Jung Hae-in (While You Were Sleeping), Sung Dong-il (The Package), Yoo Jae-myung (Forest of Secrets), and Jung Woong-in (My Sassy Girl). Wednesday-Thursday drama Smart Prison Living will begin airing on tvN starting November 22, after the end of Buam-dong Revenge Club. Source-http://www.dramabeans.com/2017/11/from-baseball-star-to-jailbird-in-smart-prison-living/
9 likes3 dislikes0 comments
By Administrator

Back to the top